Julie Chen, host of the television show Big Brother, and moderator of the morning television show, The Talk, recently revealed her long-held secret about having eyelid surgery (blepharoplasty) in the mid-1990s to help advance her career. During her poignant revelation, Chen detailed her time as a news reporter in Dayton, Ohio, and the conversations she had with her boss, and later with a well-known television agent, about how her eyes looked “heavy” and “small.” These attributes, they said, made her look disinterested and bored when interviewing people. Although born in the United States, Chen is of Chinese descent and had a specific type of eyelid procedure called “double eyelid surgery,” a common procedure at my Orange County practice for Asian patients who desire an eyelid crease or eyes that appear more “open.” She admitted the surgery made her eyes “look bigger,” more “alert,” and “expressive” and after the surgery the “ball did [begin to] roll”, meaning the results helped advance her career and led to more opportunities.

Much of the discussion and debate following her disclosure centered on two issues. One about having surgery that affected her ethnicity; that is, undergoing a procedure to make her eyes look less Asian. The other issue people talked about was having plastic surgery to advance a career. Most agreed that Chen maintained her ethnicity and that she does, in fact, look more refreshed and alert. The focus in this blog is not about ethnicity issues, but more about the impact your eyes have on how you are perceived by others, and perhaps yourself.

If we stop and think about it, the eyes have an amazing ability to either accurately express our emotions, energy level, confidence, health and age, or unintentionally convey incorrect impressions to others. For instance, patients coming to see me with eyelid bags, puffiness, excess skin, or hollows around the eyes will commonly tell me about the frequent questions from others about looking tired or sad. Questions like, “Is everything OK?,” “What’s wrong?,” or “Coffee?”

These misperceptions and questions have real-life consequences. Several studies have demonstrated that tired, sad, and older appearing eyes can adversely affect one’s opportunities in occupational and social situations. So Julie Chen’s real-life experiences both before and after her surgery are not uncommon and occur across all ethnicities. Whereas those with Asian eyelids may need a form of eyelid surgery called a “double eyelid” procedure to create a crease and produce a more alert, less tired look, others may need a different type of eyelid procedure to achieve a more refreshed appearance. Other patients may need something else, such as fat augmentation or laser resurfacing around the eyes to achieve their improved look. 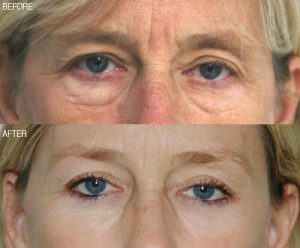 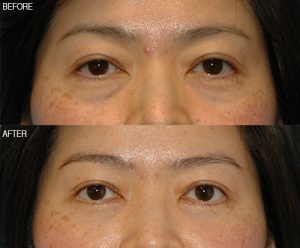 In the end, the eyes have an impact on your appearance and, right or wrong, their appearance can affect your professional and social life. The confidence to seek change such as Julie Chen did should be inspirational and only offers to make sure your inner personality and assets shine through and are not masked or mistaken, much like an uncrossed “t” or an un-dotted “i.”

(All the results and procedures were performed by Dr. Miller)